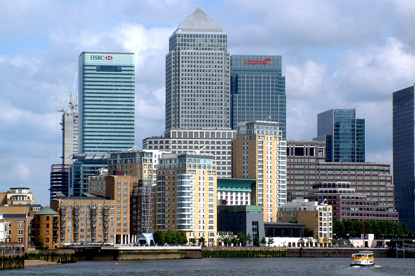 Canary Wharf is a thriving commercial district in the East of London, which is home to many of the UK’s largest financial institutions. Around 93000 people commute and work there making it larger than such places as Bath, Maidenhead, Basingstoke or Halifax.

One Canada Square was the tallest building in the UK up until recently and is the iconic skyscraper with the pointed top.  In fact Canary Wharf has 5 of the UKs tallest buildings with a couple more in the planning stages. Canary Wharf consists of over 14 000 000sq feet of office, retail and residential space.

Most of the business undertaken in Canary wharf is financial with such companies as Barclays, HSBC, Citigroup, Credit Suisse and KPMG all having their main offices there. As you can imagine tall buildings in this sector mean that many of the people who live and work there also live the high life!

Many of the bars and retail outlets take advantage of this by supplying some of the most expensive Champagne and wines at over inflated prices.  It doesn’t have to be this way as we deliver Champagne to Canary Wharf.  Champagne delivery to Canary wharf is nothing special to us as we do this most days. Simply order your gift online and we will deliver to wherever it needs to go.

We stock over 1000 different gift combinations of Champagnes, Wines, Spirits, Flowers and hampers with specific gifts for such occasions as Birthdays, weddings, anniversaries, retirements, engagements and new births. So no matter what you are looking for we can supply and deliver it all from the safety of your own desk.

Take a look and browse the website to see that we carry a far bigger selection than regular retailers and delivery is Free.  For champagne delivery Canary Wharf we can deliver anything from one gift to simply hundreds so when a deal has gone well and the boss asks to get all the team gifts we will organize and deliver them all for you through one email or phone call to us.

>> Post a bottle of Champagne to Canary Wharf in London